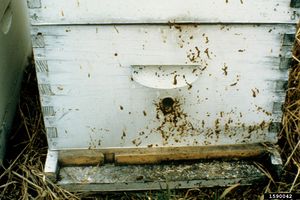 symptoms of honey bee hive infected by Nosema, stains on the wall are caused by "fecal streaking" (click on image to enlarge it)
Author(s): Georgia Department of Agriculture
Source: IPM Images

The genus is under revision. It contains more than 30 recognized species causing mainly diseases in insects. The genus still includes many other species whose DNA structure has not yet been analyzed and which might be transferred to other genera. Each sporont produces only one spore. The spores are approximately 3 x 5 µm in size, with 2 nuclei and the polar tube has 9-12 coils. The species are usually specific to one host species.

Nosema infections are acquired through the gut where the spores eject their polar filament into a gut wall cell. The microsporidium then multiplies in the cell releasing new spores when the cell dies off. Nosema apis and N. ceranae are both widespread and equally pathogenic in honey bees, but Nosema ceranae is now more prevalent after it has spread from its native Asia to other parts of the world around 2000.