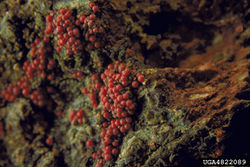 In Europe and some other regions, this fungus causes canker on various trees, as well as rots on apple and pear fruits (European canker of apple and pear trees). It enters the plants through wounds, e.g. pruning wounds. In North America, it is often involved in the "beech bark disease" in combination with the beech scale, Cryptococcus fagisuga which facilitates entry of the fungus into the tree. For a review of this disease see Mihál et al., 2015.

In Europe, a similar disease has been described as "beech bark necrotic disease" which is characterized by necrotic wounds on the bark which results in deformities and the breaking of branches. This disease is again associated, among others, with Cryptococcus fagisuga.