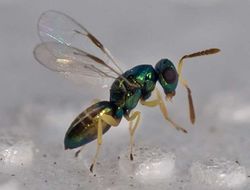 This wasp is an important parasitoid of the cabbage seedpod weevil, Ceutorhynchus obstrictus in Europe. It was released in Canada in 1949 under the name of Xenocrepis pura (Gibson et al., 2006) and was reported as establisbed. However, the M. morys records from North America were misidentifications for a closely related and presumably native species, Mesopolobus moryoides (Gibson et al., 2005).