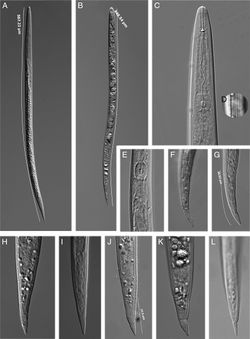 This root-knot nematode has been originally described from the roots of apple trees in Japan. It was later also reported from elm trees in Europe, where it seems to have been imported with planting material from Asia. Further, it has been found on ornamental Euonymus in the U.S. M. mali is polyphagous and in Japan it has been described from various trees, shrubs and herbaceous plants. It is of quarantine concern in many countries.

On young roots, the galls have normally a diameter of up to ½ cm, but on older elm roots, large galls, up to 1-2 cm in diameter can develop. In such severely infested elm trees, early leaf fall and a reduced growth has been described, including a tendency for trees to be uprooted during storms.

For a review, including a diagnostic protocol, see Anonymous (2018)