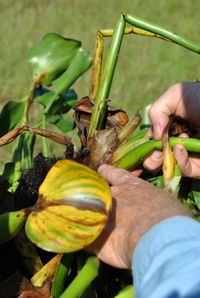 This planthopper has been used as a classical biological control agent against the aquatic weed water hyacinth (Eichhornia crassipes). It feeds on the leaves and can produce several generations per year. M. scutellaris is native to South America and has been released into several countries invaded by water hyacinth. For example, in Florida more than 70,000 planthoppers have been released over several years, starting in 2010, and it became established in several locations (Tipping et al., 2014).