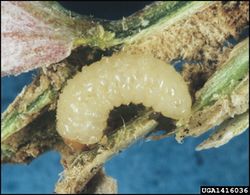 This species is a stem-boring weevil, native to south-eastern Europe which has been introduced into North America (1992-1993) (as Mecinus janthinus, see Tosevski et al., 2011) against the weed Dalmatian toadflax, Linaria dalmatica.

It is morphologically similar to M. janthinus but larger (about 4 mm long, whereas M. janthinus is usually smaller than 4 mm) with the rostrum of the female more curved in lateral view, smaller punctures on the pronotum, the scales on the elytra between rows denser and differences in the male aedeagus tip.