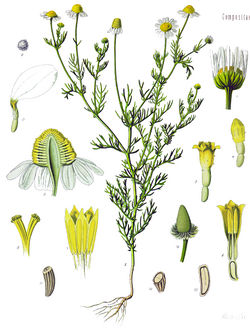 This species is cultivated as a medicinal herb, but the wild form can be an agricultural weed. It is widely distributed in temperate and semi-tropical regions and grows well in open areas. It has been reported from several soil types, but seems to prefer nitrogen-rich soil. The weed can affect various crops like cereals or vegetable. The seeds spread with the harvest and can persist in the soil for many years.