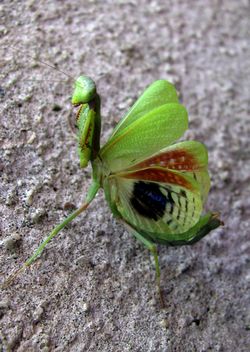 The "European praying mantis" is widely distributed in warmer regions, but absent in South America and Australia. In Europe it is mainly found in countries around the Mediterranean, although the egg stage can tolerate freezing temperatures. It is a general predator, catching any type of arthropod. Even small lizards have been reported as prey. Females are usually 60-75 mm long and males 50-60 mm. The colour is typically green, but may be brownish. There is a distinctive black mark on the fore costa (see illustration below)