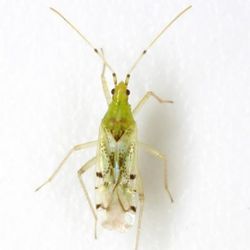 This genus of mirid bugs contains several species which are important for the biological control of plant pests like aphids or whiteflies. They are mainly used in greenhouses and several are commercially produced. Some are zoophytophagous which means they feed both on insects and plants. For the biological control agents, plant injury is typically minor and is tolerated because it helps the bugs to survive when prey is absent or scarce. Important species are Macrolophus pygmaeus and Macrolophus melanotoma.

The adults are typically 3-5 mm long. The genus is characterized by the eyes being placed on the sides of the head. Another features is the pink, red, or dark longitudinal stripe behind each eye which is present in many species.