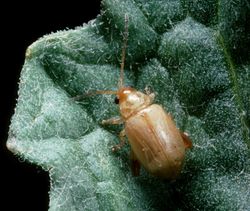 This flea beetle is native to Europe and temperate parts of Asia. It has been introduced into North America against the weed common (tansy) ragwort (Jacobaea vulgaris) starting around 1970 (e.g. see Hoebeke & Wheeler, 2005). Following successful establishment and effective control of the weed (see illustrations below), it was also introduced into other countries like New Zealand (starting 1983). The beetle is host specific for Jacobaea vulgaris as has shown poor survival on closely related plant species.