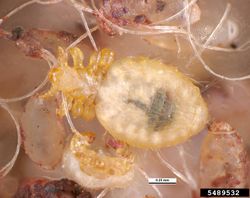 This genus of sucking lice includes around 50 species. The hosts are mainly ungulates like cattle, sheep and goats. Dogs are also hosts for some species. Several species, like the sheep foot louse (Linognathus pedalis) can be serious pests and in large numbers can cause weight loss and even death of the host.

The species of Linognathus have no wings, no eyes and five-segmented antennae. The 2nd and 3rd pairs of legs are longer than the first one and end in prominent claws. Adults are around 2-3 mm long with males being smaller than females.