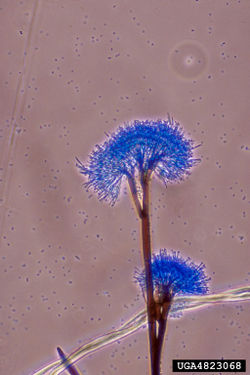 The fungi of this genus are widely distributed and are mainly associated with trunk and root diseases of pines and other conifers. They may also infest wood products. The species are usually transmitted by bark beetles. The larvae of the beetles feed on the fungi together with the phloem and the adults often have special structures, mycangia, to transport the symbiotic fungus to other trees.

The conidiophores of the species resemble those of Penicillium and the conidia are produced in a sticky substance which adheres to the insect vector. The teleomorph forms of Leptographium have been described under the genera Ophiostoma, Grosmannia and related genera.