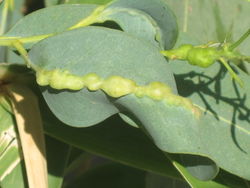 The wasp is a widespread pest of eucalypt, with a suspected Australian origin. The wasp has been introduced into various eucalypt growing regions around the world, for example Africa (first record in Algeria in 2000), Asia (first record in India in 2001), Europe (first record in Italy in 2000) and North and South America (recorded in several countries since 2008).

The adult wasp lays eggs into the midribs of young eucalypt leaves as well as into the petioles and branches of young shoots. This induces the formation of galls which have the appearance of irregular bumps, often arranged in groups of up to 50 per leaf. The whole development of the insect takes place inside the gall from where the new adult eventually emerges. Severe infestations result in leaf drop, growth reduction, dieback and occasionally even plant death. In particular young trees are affected.

The wasp apparently disperses mainly through planting material. Development inside the gall lasts 4-5 months and there are 2-3 generations per year. The adult wasp is slight longer than 1 mm and dark metallic blue. Males are rare and females usually reproduce by parthenogenesis.