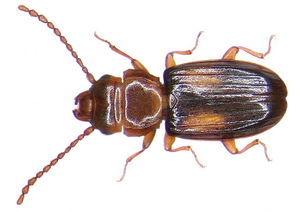 The family Laemophloeidae contains around 500 species of small (1-5 mm) and flat beetles. They are primarily fungivores and mainly live under the bark of trees. Several species of the genus Cryptolestes are important pests of grain stores like the rusty grain beetle.

The genus Cryptolestes Ganglbauer, 1899 contains more than 40 species of which about 5 are considered serious pests and have a wide distribution. They are called "flat grain beetles" and are characterized by their reddish-brown body, 2 mm or less long. The antennae are long and a ridge runs from the side of each eye along the sides of the pronotum. The head and thorax together are about equal in length to the abdomen.

For details on the family see the respective page in Wikipedia.

The following species are currently entered under the genus Cryptolestes: