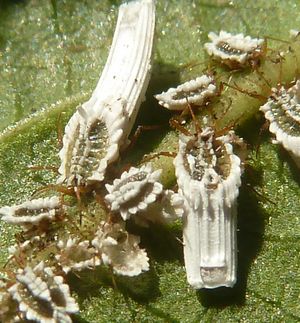 This scale insect is widely distributed and polyphagous. It is native to Central and tropical South America, but has spread to many other regions. It is usually regarded as a minor pest, but can cause more serious damage in semi-arid areas. Outbreaks have been reported on citrus, coffee, or olive from Hawaii, East Africa and South/Central America. In temperate regions it is mainly a greenhouse pest on ornamentals.

In introduced regions, it has been controlled successfully through native or introduced natural enemies (Bartlett et al., 1978). For example, in Hawaii, where it was first discovered in 1899, it was originally believed to be beneficial, since it infested mainly the invasive weed Lantana camara. It was even transported to outer islands, but later become destructive on ornamental plants. Successful classical biological control was achieved through the introduction of the coccinellid Hyperaspis jocosa from Mexico.

There are 3 generations per year. The mature female is brown to dark green, with dorsal and marginal wax filaments and a long characteristic egg sac.