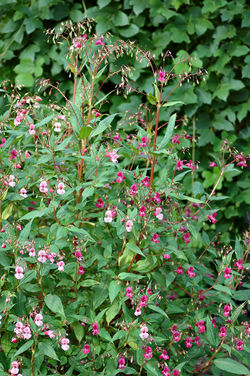 This weed is of Asian origin (Pakistan, northern India and Nepal) and has been introduced as an ornamental into Europe in 1839, subsequently also into North America. It has become an invasive environmental weed in wet and wooded areas. It quickly covers the ground, forming dense monospecific stands and out-competes native vegetation. It prefers semi-shaded habitats, and apart from river banks and woodlands, it can be also common in wastelands and railway embankments.

In the winter, the plants die off and river banks with dense populations become bare, promoting soil erosion. Waterways may be blocked due to the plant debris. With a height of up to 2½ m it is the tallest annual plant in Europe.