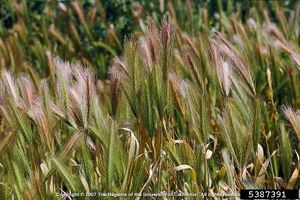 This genus of grasses contains around 40 species, including the crop barley which is widely grown in many temperate and subtropical areas. Some species and subspecies are considered important agricultural weeds like hare barley, Hordeum murinum subsp. leporinum, or foxtail barley, Hordeum jubatum (weed). The weedy species affect crops like cereals, rape/canola or legumes.

The genus is characterized by the spikelets being arranged in triplets along the ear. Each spikelet has a single flower, but the lateral spikelets of each triplet are often sterile or little developed.