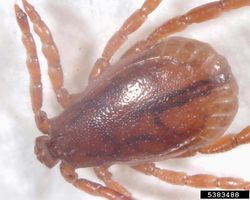 The genus contains around 150 species, found mainly in the old world. The species have 3 hosts with larvae and nymphs feeding on small mammals and birds and adults on larger mammals. They are able to transmit a number of diseases.

The species are comparatively small without eyes and an inornate scutum. They have festoons, a series of groves at the posterior end. The palpi are short and usually conical and with a lateral projection on segment 2 which extends beyond the basis capituli.