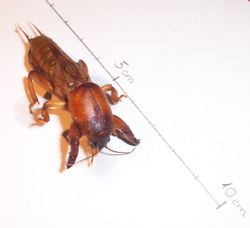 This genus of mole crickets is widely distributed and includes more than 50 species. Like in other genera of mole crickets, the members have powerful forelegs, used for digging underground. Some species are minor crop pests or are accidentally introduced into other countries and considered invasive. They feed on roots or tubers and can destroy plantings, but they are also predators of soil insects. During the night they feed on the upper parts of plants.