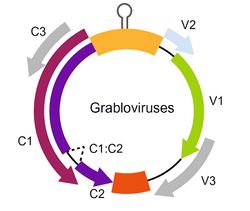 The genus Grablovirus contains viruses similar to the Grapevine red blotch virus (GRBV). Like in other Geminiviridae, the particles are non-enveloped and incompletly twinned (geminate). GRBV differs from other genera of that family by its genome organisation, with two intergenic regions (Varsani et al. 2017).

Grapevine red blotch virus infects grapevine and has a DNA genome with ∼3,206 nucleotides. It has been described from California in 2012 and was also reported from Canada and in 2014 from Korea. In red grape varieties it causes irregular red blotches, red veins, and occasional marginal reddening on the leaves. In white grape varieties infections result in irregular chlorosis of the leaves. The symptoms might resemble those of infections by the Grapevine leafroll-associated virus 2. In California, the virus is transmitted by the treehopper Spissistilus festinus (Bahder et al., 2016).