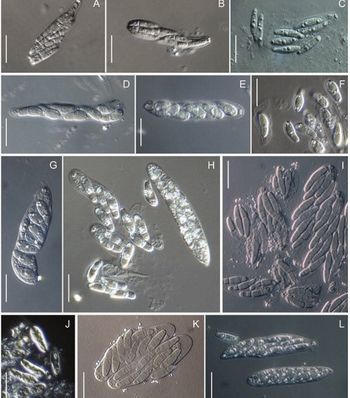 The fungi in this genus are found in various regions and affect a variety of plants. For example they cause chestnut rot and rot on strawberry fruits.

The characteristics of the genus have been described by Sogonov et al. (2008) as follows:
Perithecia solitary or groups up to 5, without stroma, on fallen, overwintered leaves and twigs of trees and shrubs, usually epiphyllous or on petioles, on dead parts of herbaceous plants. Perithecia black, remaining immersed, spheroidal to suboblate when moist, convex or irregularly dented when dry, round in top view, with one neck. Necks central to lateral, slightly curved to curved, shorter or slightly longer than perithecial diam, sometimes almost absent. Asci oval to fusiform, with an apical ring, with eight spores arranged mostly biseriate or obliquely uniseriate, less commonly irregularly multiseriate. Ascospores two-celled, oval to fusiform, l:w 1.5–5, usually somewhat ovoid or pyriform; ends rounded; appendages absent.