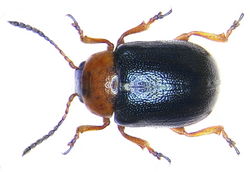 This leaf beetle is native to Europe as well as temperate parts of western and central Asia, but it is introduced in North America. G. polygoni is mostly regarded as beneficial and feeds and breeds on weeds from the knotweed family (Polygonaceae) like Fallopia convolvulus. However, it may also attack cultivated plants from that family like buckwheat (Fagopyrum).

The adult beetle is 5-6 mm long, with metallic blue or green elytra. The thorax and legs are mostly brown, but the head, the anterior parts of the antennae and the ventral parts of the abdomen are black or dark brown.