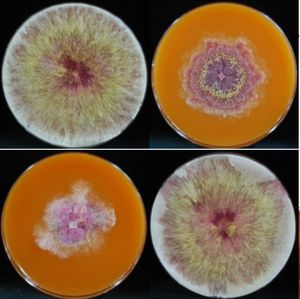 Species of Fusarium are among the most destructive pathogens of crops. Several mycoviruses have been described from Fusarium, some of which are of interest as biological control agents of plant pathogens. These belong to various families, including the Partitiviridae, Narnaviridae, Totiviridae, Deltaflexiviridae and Chrysoviridae.

For example, a number of mycoviruses have been described from the Fusarium head blight pathogen Fusarium graminearum, like "Fusarium graminearum virus 1" (FgV1) from the family Partitiviridae. This virus causes abnormal colony morphology, defects in perithecium development, and reductions in growth rate, conidiation, and virulence, e.g. see Lee et al. (2014). Others, like the viruses FgV3 and FgV4 from the families Totiviriridae and Chrysoviridae, cause few if any changes in the host fungus.