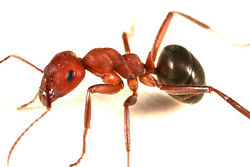 This is a large genus of ants containing more than 150 species. They typically live in forests and feed on honeydew and on other insects. Most species are considered to be beneficial predators of insect pests, see the predator species of Formica. However, some are regarded as pests because they protect harmful insects like aphids and scales in crops. This page deals with the latter group.

Some species might form large colonies containing up to 1 million workers. The nests are build in the ground with a small above-ground mound. The genus is characterized by several morphological characters like the structure of the mandibles or the position of the antennal sockets.