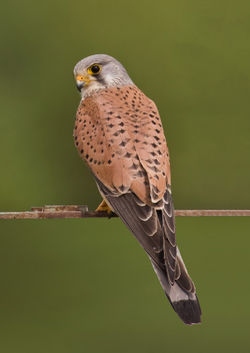 The common kestrel lives in Europe and parts of Asia, but often migrates in the winter to warmer regions of Asia and Africa. It mainly hunts small mammals and consumes daily about a quarter of its own weight in prey. Birds and large insects may be also eaten. It is regarded as an important natural enemy of mice and pest voles. During vole outbreaks, voles may form up to 80% of its prey. Kestrels can be found in fields and grassland but also near human settlements, nesting, for example, in high buildings. Adult birds measure between 30-40 cm form head to tail.