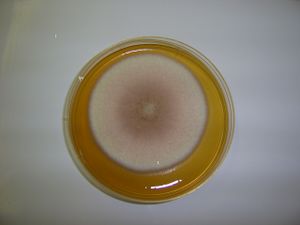 culture of a species of Paecilomyces (click on image to enlarge it)
Source: Wikimedia Commons

This class of ascomycete fungi is mainly defined by its DNA sequence. Penicillium and Aspergillus are familiar members of this group. There are 2 types of sexual fruiting bodies:

Note:
This page only deals with entomopathogenic species. For other groups of Eurotiomycetes in the system see

The following orders of entomopathogenic Dothideomycetes are included in the system: