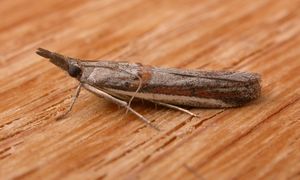 This is a small genus of snout moths, containing around 10 species which are found mainly in Asia and Australia. The adults typically have a wingspan of around 20-25 mm. The larvae feed on legume seeds and some species are regarded as agricultural pests like Etiella zinckenella, the lima bean pod-borer, which is widely distributed and damages crops like beans or soybeans.