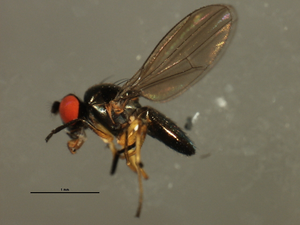 This family of flies contains around 2,000 species which are found mainly in swamps and marshes, including salt marshes. Several are known as rice pests or nuisance flies but several are considered useful biological control agents of weeds. This page deals with the latter group. The larvae often mine the stems or the leaves. The members of Ephydridae are in general small (1-10 mm) dark coloured flies. Taxonomically they are closely related to the Drosophilidae.

Note:
This page deals only with biological control agents of weeds. For other groups of Ephydridae see:

The following genera are currently entered as weed bioagents under this family: