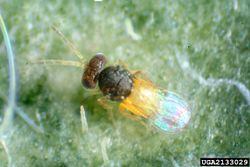 The adult wasps are tiny, typically less than 2 mm long. The females usually develop as primary parasitoids while the males develop as hyperparasitoids in the same or in other parasitoid species.