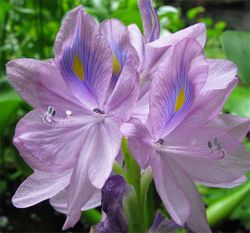 This is a perennial, free floating aquatic weed which is probably native to South America. It has been first reported from Egypt in the 1880s and has since invaded waterbodies in many tropical and subtropical areas of the world. Through its dense mats, it blocks access of light and oxygen to the water, suppressing other plants and animals and obstructing human use of the lakes and rivers.

The biomass of the weed may double in as little as 2 weeks. Control through biological agents or herbicides have been shown to be effective.

The plant grows to a height of about 1 m. The leaves are arranged in a rosette, the petioles are bulbous when plants are in open water. The flowers are lilac to blue. The seeds sink and may be viable for 5-20 years, but the plant reproduces and spreads mainly vegetatively.