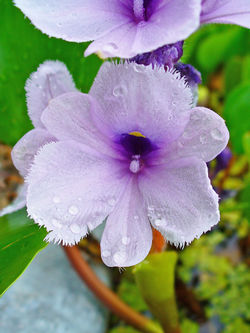 The genus contains around 10 species of aquatic plants which are, with one exception, native to South America. Several species have been introduced into other countries as ornamentals and 2 of them are regarded as invasive weeds with Eichhornia crassipes being the most important one. This weed has been found in various tropical and subtropical regions, mainly in lakes or larger rivers which can be completely covered. The plants obstruct human use of the water bodies, block sunlight for native aquatic plants and deplete the water of oxygen.