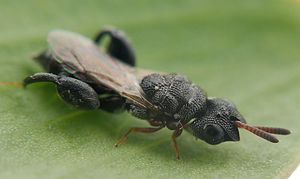 This wasp is an important polyphagous parasitoid of fruit fly pupae. Other flies like house flies may be also attacked. It is native to West Africa, but has been introduced into parts of Asia, the Pacific, South America and Africa against various fruit fly species (Bartlett et al., 1978). However, it may also be a hyperparasitoid of other fruit fly parasitoids.

Females of D. giffardii pierce the wall of fruit fly pupae and inject eggs. More eggs will be laid in larger pupae. The adult wasps are 3-5 mm long, black, with legs and antennae reddish-brown. Like other species of Dirhinus, it has two prominent, horn-like ridges extending out from the face and enclosing the bases of the antennae.