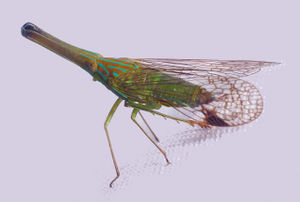 a species from the family Dictyopharidae (click on image to enlarge it)
Author(s): L. Shyamal
Source: Wikimedia Commons

The family Dictyopharidae contains more than 500 species, many of them found in the tropics. They are elongated fulgorids with elongated wings and often a prominent extension or process on the head. Typically the body length is around 15 mm. Many members of the related family of Fulgoridae also have a similar extension on the head but are in general larger.

Species of Dictyopharidae often feed on grasses and cereals. Dictyophara europaea is a polyphagous species occurring in central and southern Europe. Among other plants, it feeds on grapevine and has been found to carry the "bois noir" phytoplasma. It may therefore be a vector of the agent of this important grapevine disease.

The following species and genera are currently entered in the system: