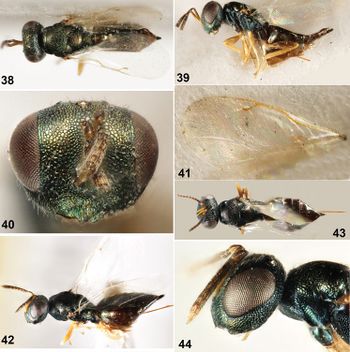 This wasp is widely distributed in the northern hemisphere and has been recorded as a polyphagous ectoparasitoid of various insects, including pest species like Lobesia botrana or Plutella xylostella. Outside the order of Lepidoptera, the hosts include species of Diptera, Coleoptera and other insect groups.

The adult wasp is around 2 mm long with a metallic greenish-black colouration. The antennae are brownish and the legs yellowish. The names Dibrachys cavus and Dibrachys boarmiae have been used for this species before its taxonomy was revised, see Peters & Baur (2011).