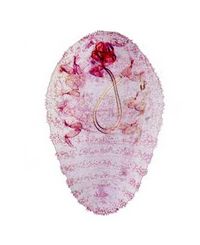 This scale insect feeds on prickly pear cacti (Opuntia) and is native to Central and parts of South America. It is considered a pest of cultivated Opuntia species but has been also used as a biological control agent against invasive Opuntia. For example, it was introduced into Australia and South Africa for biocontrol. Its current distribution includes many countries in Africa, the Americas, southern Europe, Australia and parts of western Asia.

Dactylopius opuntiae females produce carmine dye which was highly valued in ancient times and led to the introduction of prickly pears and the scale into several countries. In many of these countries the scale is now regarded as a pest, because Opuntia is used as a food for humans and livestock.