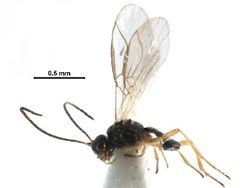 This wasp is native to Europe and has been introduced into North America in the 1970s against the invasive alfalfa blotch leafminer (Agromyza frontella). Although, the parasitoid larvae are sometimes encapsulated, parasitization rates were still high in North America, around 20 years after its introduction (Heimpel & Francois, 2001).