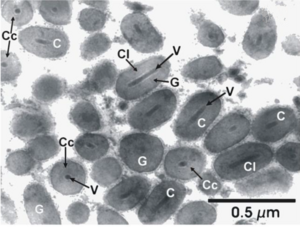 The virus infects the apple codling moth (Cydia pomonella) and is commercially produced. It is sprayed on developing apples and the newly hatched larvae ingest it before or during entering the fruit. They die from the infection after about a week. A combination of this method with mating disruption by pheromone formulations provides a pesticide-free control without risks to beneficials or the environment. Drawbacks are the relatively high costs and the fact that the virus is quickly inactivated by solar UV light and requires frequent applications.

With the commercial use of the virus, some cases of resistance to the virus have been detected in C. pomonella populations (e.g. Jehle et al., 2017). Since all commercial virus formulations are based on the isolate CpGV-M, new virus isolates are being explored which can overcome virus resistance. Several isolates (e.g. isolate I12) have been identified in France as being able to infect highly resistant C. pomonella larvae (Berling et al., 2009).