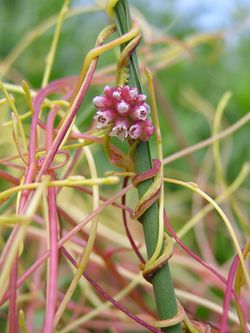 The genus of dodders contains around 200 species of holoparasitic plants. Some of which are important agricultural weeds like field dodder, Cuscuta campestris, which is widely distributed in the northern hemisphere. They wind round the stems of their host plants and attach haustoria which grow into the phloem of the host, extracting nutrients and minerals for their growth. For heavily infested cranberry patches yield losses of more than 80% have been estimated (Tjiurutue et al., 2016). Some species are being used as medicinal herbs.

The species are annual stem parasites. They appear leafless but have small, scale-like leaves. The stems are thin, coloured mostly orange, red or yellow. The flowers are 2-5 mm wide. The tiny seeds are typically about 1-2 mm in diameter and spread easily to other fields together with the crop seeds or through water and animals. The name of the genus comes from the Arabic word for dodder, كشوث (kushūth).

Currently, the following weed species have been entered into the system: