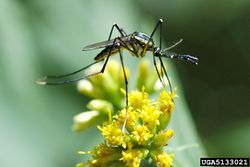 The family of Culicidae contains several thousand species. The large majority of which are blood-sucking mosquitoes, see Culicidae (pest species). However, the larvae of a number of species are predators, feeding on other mosquito larvae. This includes, for example, several species of Culex as well as all species of the genus Toxorhynchites.

The following species are currently entered under this family: