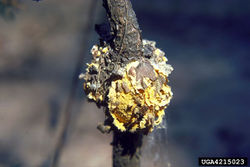 This rust fungus has been reported from North America, Asia and Europe. However, the identity of the isolates from outside North America is not clear and possibly belong to other species like Cronartium orientale which has been previously regarded as a subspecies of C. quercuum. In North America, it is found in eastern States and causes gall-like swellings or cankers on the stem and branches of pine trees.

On mature trees, the disease results in weakening of the trunk and branches and may lead to wind damage. The commercial value of the timber may be also reduced. Pine seedlings under the age of 5 years are often killed by the disease. In southern North America the subspecies Cronartium quercuum f. sp. fusiforme is found which causes spindle-shaped galls.

On pine trees the fungus produces orange asexual spores. These disperse by wind in early summer and infect new leaves of oak trees, the alternate hosts. On oak, the fungus passes through the sexual stage of its life cycle, forming small hair-like telia which release teliospores. The teliospores re-infect pine trees in autumn. Oaks are an important part of the life cycle of the fungus, but experience little damage.