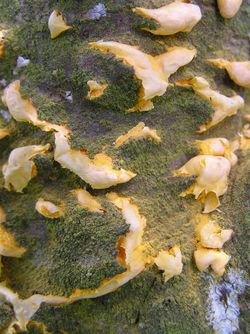 The genus contains more than 20 species of rust fungi which infect forest trees causing blister rusts, cankers and gall rust diseases. Mainly pine trees become infected. Economically the most important species is Cronartium ribicola which causes white pine blister rust. That species has been introduced into North America around 1900 and is causing serious outbreaks on white pines (species of the subgenus Pinus).

The typical life cycle on pine trees starts with the infection of needles by (haploid) basidiospores which are often transported by the wind. These infections produce pycnia and pyniospores and subsequently aecia and diploid aeciospores. The latter are wind-borne and infect an alternate host, normally a dicotyleodonous species like Ribes, Pedicularis, or Castilleja. On the alternate host uredia and urediospores are produced. The latter infect another alternate host where telia and teliospores develop. These germinate and form again the airborne basidiospores.