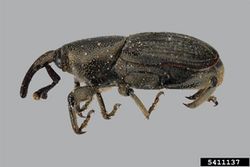 This genus contains a few species of weevils. The main pest is the banana weevil (Cosmopolites sordidus) which bores into banana corms, causing serious damage. It is native to South-East Asia but has spread to many banana-growing regions around the world.