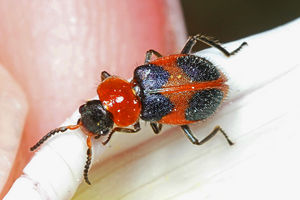 This genus contains around 70 species of soft-bodied flower beetles, most of them are found in North America. The adults are around 5 mm long and are often colourful with red or yellow and black markings. Both larvae and adults prey on other insects. The larvae live on the ground, while the adults are found on plants and also feed on pollen.

The adults of some Collops species are regarded as useful general predators of small pest insects like whiteflies or aphids. For example, Collops vittatus preys on insect pests of cotton and alfalfa in North America.