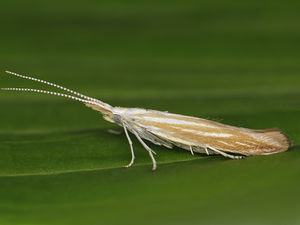 This large genus of small moths is widely distributed and includes more than 1000 species. The larvae mine leaves, needles, flowers or developing seeds when they are young. In later instars they construct a protective case and feed externally. The species often have a narrow host range and several are regarded as pests like the larch casebearer, Coleophora laricella, which has been introduced from Europe into North America.

The adult moths typically have a wingspan of around 10 mm. The forewings are narrow and in some species have a metallic colouration.