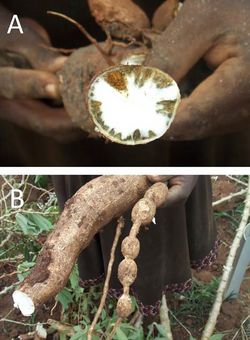 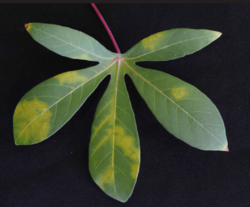 This virus causes an important disease of cassava in parts of eastern and southern Africa. The tubers are mainly affected and develop a yellow/brown, dry, corky necrosis. They might also show root constrictions. Leaves show symptoms of chlorosis and stems sometimes develop lesions. The cassava brown streak disease can be also caused by Ugandan cassava brown streak virus.

The virus spreads via planting material and can be transmitted by the whitefly Bemisia tabaci in a semi-persistent manner. Yield losses can exceed 50% and have been estimated in Tanzania at more than 800,000 t annually (Ndyetabula et al., 2016). Outbreaks are favoured by high whitefly populations.

The disease was first described from Tanzania in the 1930s, but outbreaks have become more frequent since the early 2000s. Around that time the virus was also reported further inland, in areas around Lake Victoria and spread into other countries of eastern, central and southern Africa like Malawi, Mozambique and Uganda.

Breeding for resistance has started early after the discovery of the disease. However, no highly resistant cassava cultivar has so far emerged from these efforts. The use of virus-free material is recommended for the transport and distribution of planting materials.