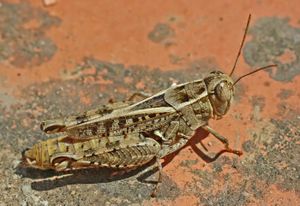 This grasshopper can be a serious pest of citrus, cotton, legumes, cereals (wheat), pastures and other crops in central/western Asia and in parts of southern/eastern Europe. Damage has been mainly reported from Central Asia and from parts of the Mediterranean region. During outbreaks, the grasshoppers aggregate with nymphs forming hopper bands and adults forming swarms which disperse and invade cropping areas. While C. italicus is still regarded as an agricultural pest, damage has been substantially reduced during the 21st century in several areas like parts of Europe.

Adult females typically have a length of 25-30 mm, but males are only around 20 mm long. The colouration is greyish or reddish brown, mottled with dark brown and often with yellowish longitudinal bands along the pronotum and forewings. The hindwings are partly reddish. Reliable identification is only possible through the structure of the male genitalia or by DNA analysis.