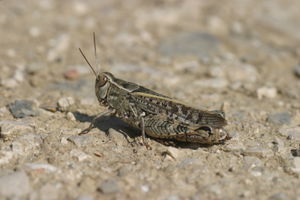 This genus includes around 15 species of grasshoppers that are found in Europe, temperate or subtropical parts of Asia, as well as in parts of Africa. Some species are regarded as agricultural pests when ecological conditions promote mass-multiplication. For example Calliptamus italicus is common in Central Asia and in the Mediterranean region and can cause damage to crops. For a review of the most damaging Calliptamus species in the Mediterranean region, see Blanchet et al. (2012).

The species of Calliptamus are medium-sized grasshoppers, females are typically 2-3 cm long, with a brownish to greyish colouration. Males are usually significantly smaller. Part of the hindwings is reddish or pinkish. The genus is mainly characterised by the morphology of the head and thorax. Only males can be reliably identified to the species level by morphological criteria.