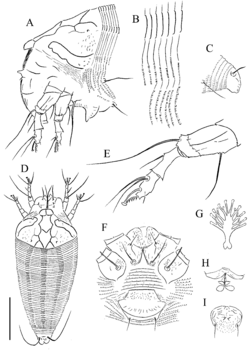 Calacarus pusillus - A) to H) female, I) genital shield of male (click on image to enlarge it)
Author: Pye, Daniel R.L.
Source: PLAZI

This genus of eriophyid mites contains around 30 species of rust mites, including several pest species that attack crops. For example, Calacarus heveae attacks the leaves of rubber trees in South America. Some species are polyphagous while others appear to have a restricted host range. The damage has been described as bronzing of the leaves, leaf rolling, and/or premature leaf drop.