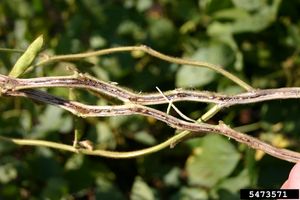 Cadophora species are widespread fungi that infest wood, causing stain (e.g. the type species) or are plant pathogens of soybeans, grapevine and other crops. The most important species is Cadophora gregata which causes brown stem rot on soybeans and other legumes.

This genus is related to the genus Oculimacula. It has originally included several species from the genus Phialophora based on morphological features (pale to hyaline collarettes on top of the phialides and pigmented vegetative hyphae).