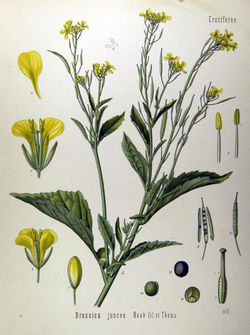 The genus contains about 40 species and is better known for its crops (e.g. cabbage, mustards, turnip). However, it contains several species which have been previously cultivated but are now mainly weedy such as B. nigra and B. rapa or are invasive like B. tournefortii. Some of the important crops can also become weedy as volunteer plants when the field is planted with a different crop in the following season.